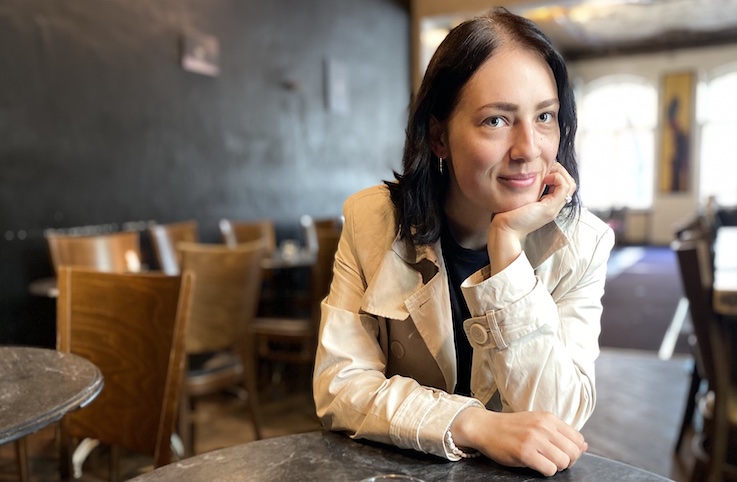 Four days in the underground I was able to satisfy the basic needs of shelter, food and water. Happiness lay in the smallest: a smile, a game with the dog, a breath of fresh air. A moment of sunlight gave me hope and the faith to go back down. Now that I am safe, other needs arise: the desire for company, knowledge, aesthetics and love; just as Abraham Maslow stated in “The Pyramid of Needs”:

Man will never be satisfied, he always wants more.

Moving into the dormitory of Kharkiv University of Arts in 2019, a new phase in my life had begun. Before, I was living on my own and suddenly, I was forced to deal with three other girls. As a Student of Acting, life opened and started to be faster and more interesting. “Why this second degree?”, you may wonder. I felt to share something from a stage, have people listen to a possible truth of life. In the past, I used to be very shy and still today I sometimes ask myself, why am I doing this?

Theatre has changed my life – I became more confident and found self-love.

At 5am on February 24th, 2022 we woke up from a strange noise. We had known a war could happen, but I personally didn’t even want to talk about it, in advance. When the sound came closer, I left the dormitory for outdoors in surprise: It was crowded with hundreds of people in the street nearby. I had never seen so many people outside, at once. They seemed kind of lost, with their backpacks in hands.

Some cried, some laughed. It was a pervasive hysteria.

Immediately, I got in a fighting mood: “Just do it and don’t think”. It was scary. I handed out my money card to a friend to have quickly withdrawn all cash from my bank account just in time, before the ATM machine was empty. I physically put 3000 UAH notes in my pants pocket and headed for the grocery store, buying a necessary food supply – canned fish and some vegetables that do not spoil fast. Also, people stocked up on water because you cannot drink from tab in Ukraine.

Around 8 a.m. I called my sister from Chernihiv in shock: “Okay, Nastya, I think it’s war!”

Over the day, the bombing became worse. Since the student dormitory has nine floors, but no save shelter, the maintenance lady advised us to immediately go to the underground. The nearest subway was only two minutes walking distance. That’s how my life in the underground of Kharkiv began – it lasted for four days days and nights, but it felt like forever. Sometimes I went outside, but not for a long time, only to quickly cook a warm meal or take a shower.

When I was washing my hair, I was afraid, that I might miss the air raid alarm under water.

Underneath was people of all ages – Ukrainians, Indians, Chinese… Some of them living inside the stopped trains. We became friends with a family with a small dog from the neighborhood. I always chose the same place to sleep near the middle column, because I figured, it would be the saftest spot. Once, someone slammed a door with a piercing noise. People jumped up in shock and I was very afraid of being trampled to death. But my friend – who is quite big – shouted with a penetrating voice: “Stop panic! It was just a door.”

From day to day, it became less crowded. Students decided to sleep in the dorms, others went on the run and were gone. People didn’t say good-bye, they just didn’t return the next evening. It was not a bad intention, from a humanitarian point of view, the interpersonal experience was quite positive: We helped each other, became common and pleasant with each other.

In those days in the underground, we became kind of a community. We knew the people next to us.

When Russian soldiers arrived in military vehicles in our area, I realized that my time had come to leave Kharkiv. My friend returned from upstairs and confirmed: “Katya, it’s not safe here, anymore. The subway station cannot be locked!” Worried about terrorists, I decided to go on the run the same day and quickly packed all the necessary things. I decided to try to get to Lviv by train, where some classmates had found shelter. In the end, I had to leave my friends behind, because they were too scared to leave. It was a hard decision, but I couldn’t wait any longer. I don’t know if they will ever get out or die tomorrow.

On February 28th at noon my father’s former boss gave me and three people from the neighborhood a ride to Kharkiv Railway Station. We drove through Kharkiv -the second largest city of Ukraine with 1,5 million residents- and I was horrified to see the whole extent of the destruction for the first time: the bombed city, burnt cars, these ashes, destroyed buildings – it was impressive. We looked out of the car window, stunned, almost speechless, then the girl sitting next to me begged:

Don’t you start crying now or I’ll burst into tears myself.

At the station, the incoming train remained with closed doors. We were running around, trying to somehow still get on the train. It was chaos and people were screaming in panic. The conductor ran up to us and said, “Come on, get in! Just go – go! Go!” In the end, the trip from Kharkiv to Lviv took 30 hours, almost twice as long as usual. Many volunteers took us in, and I lived in a refugee center until March 8th, 2022, waiting for my sister and pug to join us.

Only now that I am safe, my brain realizes: There is indeed war in Ukraine.

Previous: I was not in Bucha – Is my story still worth telling?
Next: The Wind brought the Ashes of an Attack and covered our Garden with dust.
Wir verwenden Cookies und ähnliche Technologien (im Folgenden Cookies genannt) zur statistischen Nutzungsanalyse, zur Optimierung dieser Seite und zur Anpassung der Inhalte an Ihre Nutzungsgewohnheiten. Mit einem Klick auf „Alle zulassen“ akzeptieren Sie die Verarbeitung und Weitergabe Ihrer Daten. Weitere Informationen finden Sie in unserer Datenschutzerklärung. / We use cookies and similar technologies (hereinafter referred to as cookies) for statistical usage analysis, to optimize this site and to adapt the content to your usage habits. By clicking on "Alle zulassen" ("Allow all") you accept the processing and sharing of your data. For more information, please see our privacy policy (Datenschutzerklärung).
Einstellungen/ SettingsAlle zulassen/ Allow all
Manage consent