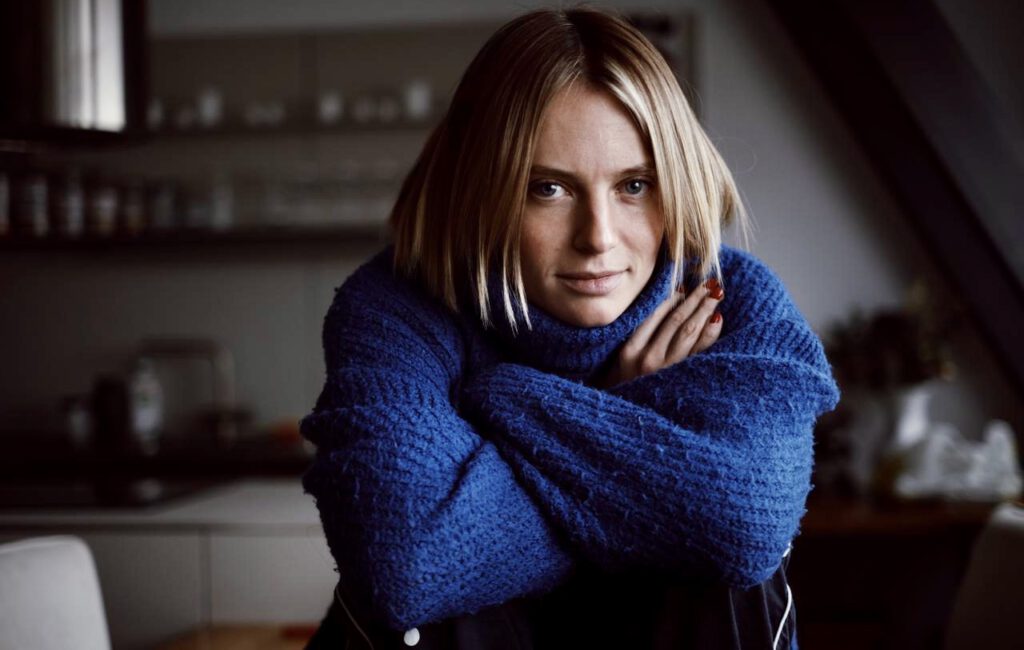 Hanna Kopylova (34) hopes that the war will be over in the summer of 2022 and her kids can go back to school in Ukraine.

In my neighborhood in Kyiv there is a small community of dog owners – every day you meet the same people at the same time. As always, I had to walk my dog on the morning of 24 February. I felt safe because my flat is located near an Orthodox church and Russians also belong to that religion. Despite the start of the war, we dog owners strolled along our usual paths, while people around were very scared. In panic, they threw their belongings into the cars while we chatted passing:

It was surreal. My children and I sought shelter at my parents’ house, located in a small village twenty kilometers outside of Kiev. With family, friends and eight children, we were 25 people altogether and to be honest, the kids partied for two weeks. They don’t read the news. Sometime in mid-March, I remember going to the grocery store to buy milk and pasta – but the shelves were empty. I realized that we aren`t helping Ukraine, if we are staying, because during war all resources are needed by the soldiers. Moreover, it happened that we came out into the backyard one morning and the garden was covered with a thin layer of dust. The wind had carried the ashes over from nearby Gostomel after the shelling. It was scary as hell.

I couldn’t go on the run with my E-car, it’s not usable for long distance.

So, I took my father’s big jeep and went on the run with my kids and my dog. We made it to Lake Maggiore, where my family owns a holiday house. In Italy, I have no income. Nobody buys books now or is interested in advertising. Still, I am hopeful because advertising was the last thing to close and the first thing to reopen after the war. Besides, I have savings for the “black day”, as we call in Ukraine the worst that can happen to you, not to say, “worst case scenario”. I never touched my savings because you never know what happens in life, and now the black day is here.

For the two months that I have been living in Italy, I always have a heart rate of 110 beats per minute. My normal rate is about 80. It feels like continuously have panic attacks without a trigger. It’s not because of bad news, no. It’s always like this, 110. I cannot be calm, anymore. Isn’t that strange?

Now, as we speak, I am joining a volunteer team in Kyiv. I had decided to return to Ukraine for two weeks in May and do something with my hands. We are a group of 600 people and help to clean up destroyed buildings in the liberated areas. Even with these air alarms here three times a day, I don’t have panic attacks anymore. My heart rate is back to normal.

I stay in my “old” apartment from which I was not sure in February, if I would ever see it again. I have met some former close friends, mostly men in town right now, who had remained in Kyiv the past months. It’s a phenomenon, but it seems that we cannot communicate anymore. It’s not a lack of words, it’s the missing connection. We were very close before war and now we are in different mood -on a different wave- because we were in different places with different problems to deal with.

It proves to me that every Ukrainian is damaged in this war, in one way or another, but everyone bears their scars.

The Wind brought the Ashes of an Attack and covered our Garden with dust.

Previous: Only now that I am safe, my brain realizes: There is indeed war in Ukraine.
Next: On stage you must smile, but when I danced the waltz, tears ran down my face.
Wir verwenden Cookies und ähnliche Technologien (im Folgenden Cookies genannt) zur statistischen Nutzungsanalyse, zur Optimierung dieser Seite und zur Anpassung der Inhalte an Ihre Nutzungsgewohnheiten. Mit einem Klick auf „Alle zulassen“ akzeptieren Sie die Verarbeitung und Weitergabe Ihrer Daten. Weitere Informationen finden Sie in unserer Datenschutzerklärung. / We use cookies and similar technologies (hereinafter referred to as cookies) for statistical usage analysis, to optimize this site and to adapt the content to your usage habits. By clicking on "Alle zulassen" ("Allow all") you accept the processing and sharing of your data. For more information, please see our privacy policy (Datenschutzerklärung).
Einstellungen/ SettingsAlle zulassen/ Allow all
Manage consent