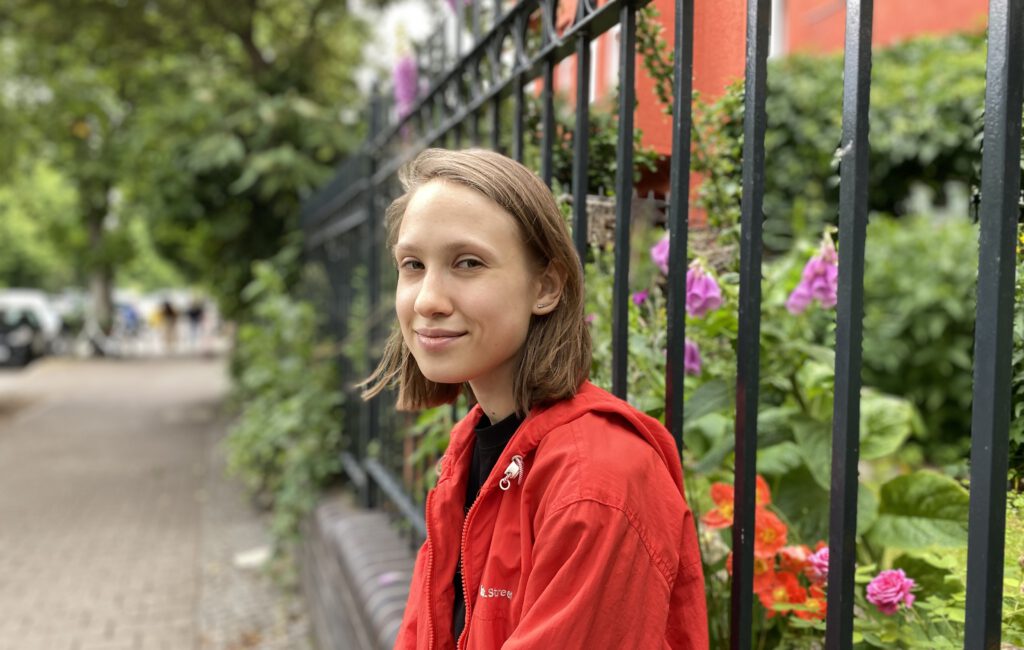 This is the story of Sofiia’s escape – with three generations of women. Her family fled from Ukraine in March 2022.

I have seen my mother cry only twice in my life: Once moving to Hostomel in 2014, when we entered the empty apartment and my father turned up his favorite song “Wings” by Nautilus Pompilius, and the second time in 2022, when we arrived in Berlin. It’s strange for me to see her crying, because my mother is always logical and calm, in any situation. She is so smart, I am nowhere near as strong mentally – I just don’t have the same abilities as she does. My mother will always be a role model for me, but those “weak” moments somehow changed my view on life. I’m glad to be safe, and I should accept what life offers me (and that’s a lot):

Now, I am an adult, and I will find my own way.

In order to understand the story of my family, I need to go back to the year 2014: I grew up in the Donezk region, east of Ukraine, where my parents had built a nice life for us: They had savings, a beautiful home and two cars. My mum was working as an economist and my father is a mining engineer. With the progressive clashes between Ukraine and Russia in this region eight years ago, my parents had to give up everything and start all over again. The move to Hostomel near Kyiv was hard, but in another way good for them, because they understood that there is no need to safe all your life but go out -to cafes and exhibitions- go out, travel and live and enjoy life.

They arrived and believed: “In Hostomel we will build a new life and stay forever.”

At the beginning of the Russian invasion in 2022, I was in the comparatively safe Lviv, where I had moved to study Interface Design four years ago. On the other hand, my family was staying in the dangerous zone: Hostomel is directly adjacent to Butcha, the region hosts a strategically important airfield for the army. So, on the morning of February 24th, 2022, Russian paratroopers captured it.

Our city was full of tanks and soldiers – it seemed to me like an apocalyptic movie.

My parents and grandmother lived in a large apartment complex divided between two flats. They stayed on the second floor – immediately the water supply was cut – as was the WiFi connection. The Russians broke into the apartments looking for Ukrainian soldiers, yelling, “Everyone get out and put your phones on the floor!” They destroyed the phones, but my mother secretly kept her work phone so we could communicate. I tried to help my parents by sending them news and hope. Phone calls were impossible, we could only send text messages once a day due to terrible connectivity and the need to conserve battery on mom’s phone. My mother would sit in the bathroom writing: “We hear voices, someone is shooting, we are afraid, everything is on fire, we don’t know if the neighbors are hurt” …

This horrible situation lasted maybe a week, but for me it felt so much longer.

At that time, I couldn’t cry to keep a clear head. Only now I have these bad feelings, it’s so disturbing that I can’t find the right words for it. The worst hit, however, was the family of my father’s best friend. He had also lived in our complex with his wife and daughter Sofiia (has the same name as me). They tried to leave Hostomel on March 3rd, 2022. Officially, there was supposed to be a “green corridor”, but the Russians didn’t follow the agreements and shot at civilians. In the process, Sofiia lost her left arm completely due to a shelling.

And she lost her mother, as our friend lost his wife, and we lost a friend. It is a tragedy.

Immediately after this tragedy, my parents decided to flee as well. It was no longer possible to stay in the apartment complex. The flats were damaged, as was my parents’ car – no windows anywhere. Without knowing whether the “green corridor” was safe or a fake, they set off. They convinced my grandmother, who is almost 90, to sit in a shopping trolley and be pushed out into the street. Around them, the unpredictable war raged. On the six-kilometer “green corridor”, a bus stopped and offered to take my mother and grandmother. In this way, my parents lost sight of each other, as my father and brother continued by foot. Again, it was me who helped from a distance on the phone to get oriented and later to find them again. After a few exhausting days, all the family members were thus reunited with me in Lviv.

I am not religious, I am actually agnostic, but some higher power is definitely helping our family. I really think it’s a miracle that all the members escaped – first from the Donezk region in 2014 and now from the Kyiv region in 2022. I now understand that I have to rely on something that is above us, that you might call fate.

We are all modern people, we all read the same books – How can that happen in the 21st century?!

By now, my father and brother as well as my boyfriend still are in Ukraine, my Mum and I stay in Berlin, while my grandmother has moved to Spain. She is with my aunt – her daughter – who has been living in Spain for more than ten years. She enjoys being with her relatives and says: “The mild climate in Spain reminds me of a vacation in Soche, Russia when I was a young woman… it makes me feel young again!”

They were a wonderful family, why does evil happen to good people?

The tragedy with our friends, on the other hand, was a huge blow to my world view. I still don’t understand it. They were neither worse nor better than us, and I keep asking myself: Why did it happen to them of all people? It’s not fair. Why do they have to suffer so much? No one deserves this. Now Sofiia and her father are in Italy. They recently celebrated her 14th birthday and are raising money for a prosthesis.

If you would like to help and donate money for Sofiia’ s prosthesis, please go here for more information!

They pushed my grandmother in a shopping cart out of the bombed city.

Previous: One day our children will return and rebuild their homeland Ukraine. 
Next: As Iranian on the run from Ukraine, if I want to return there one day, I must remain in the EU now.
Wir verwenden Cookies und ähnliche Technologien (im Folgenden Cookies genannt) zur statistischen Nutzungsanalyse, zur Optimierung dieser Seite und zur Anpassung der Inhalte an Ihre Nutzungsgewohnheiten. Mit einem Klick auf „Alle zulassen“ akzeptieren Sie die Verarbeitung und Weitergabe Ihrer Daten. Weitere Informationen finden Sie in unserer Datenschutzerklärung. / We use cookies and similar technologies (hereinafter referred to as cookies) for statistical usage analysis, to optimize this site and to adapt the content to your usage habits. By clicking on "Alle zulassen" ("Allow all") you accept the processing and sharing of your data. For more information, please see our privacy policy (Datenschutzerklärung).
Einstellungen/ SettingsAlle zulassen/ Allow all
Manage consent