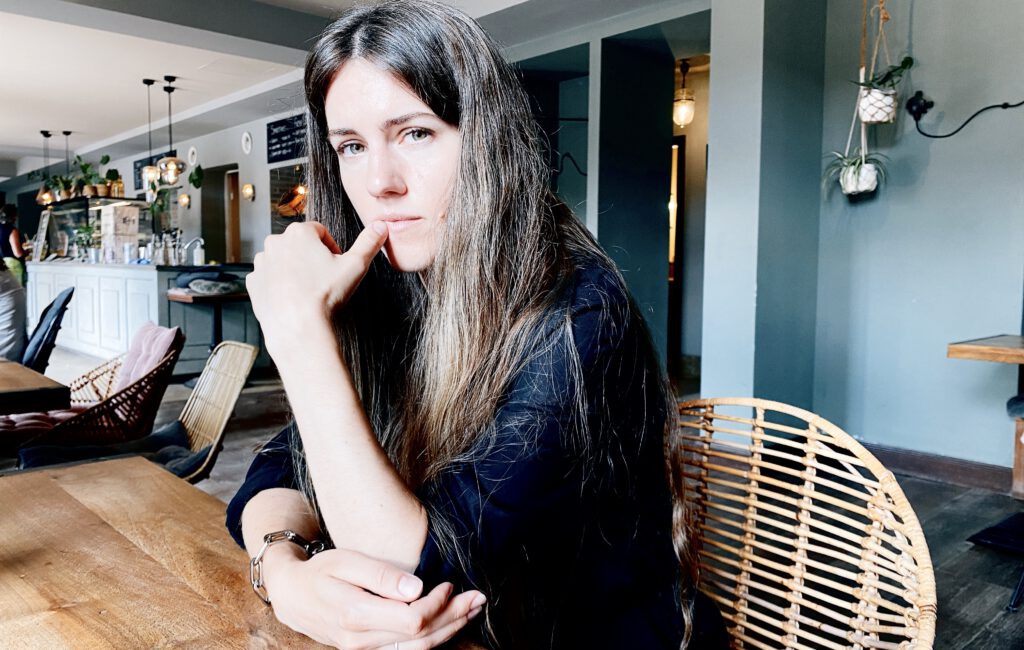 Mariko Becher (34) thinks it’s important to document the moment, because “When I compare my feelings from the beginning of war and with now, I realize that there is a big difference: When it started, I did a lot of yoga, meditation and disciplined myself – but after only one week I became sad and addicted to news...”

On the morning of February 24, 2022, I woke up in the train sleeper car to frantic phone calls in the aisle. I said to my husband Roman “Wake up, war has started!” We still had three hours of train travel ahead of us to the Carpathian Mountains in Western Ukraine. We sat in the train compartment, looked out the window and somehow, I wished the train would go on forever. No idea what to do next. Then our friend Sergiy came into the compartment and adviced to stick to our original plan – going to yoga retreat in the forest with simple huts and yoga places. The owner had assured on the phone that it was a safe place with no attacks because it was in the outback.

The realization that the war was not going to end anytime soon made me fall.

I have been married to Roman for ten years. We have been living in Kiev, my hometown, which has become a very up-to-date city after the revolution. I worked as a 1st Assistant Director in advertising and music video production, a position where you manage everything and everyone. It’s fun but also exhausting and by the end of last year, I was pretty drained of it. At the same time, my great-aunt and – uncle that were for me as second mother and father passed away… I have had a very close relationship with them all my life. They helped raise me because my mother was only 20 when I was born. In December 2021, they both contracted Covid within a week of each other and died on the same day, together on Christmas Eve.

In January, I decided it was the right time for rest and vacation. I booked a flight to India to go to my Ukrainian friends resort “IndaHotel” to have there full time relaxation with Ayurveda, yoga classes and meditation, where I’ve wanted to go for more than ten years. During my meditation on January 20th, 2022, I suddenly had this premonition. I felt deep inside that something bad was coming very soon, which had a very negative effect on my mood and general condition. For relief, a friend of mine invited an Indian artist as a surprise for me and she did “mehndi” (Indian tattoo painting on my hands). After a couple of hours together I felt better but looking back today I think I really had a vision.

In India, I suddenly had a premonition: I felt that something very bad was about to happen.

My husband Roman – who had stayed in Kiev- didn’t want to follow my intuition when I said to him on the phone, “Maybe it’s time to leave for month Ukraine and go somewhere abroad.” Like many Ukrainians, he couldn’t believe that such nonsense as war could happen. “Come on, Mariko. It’s not possible, what are you talking about?” So, I attributed this deep feeling inside me to homesickness, longing for my love, and a desire for change. We had been thinking a lot about our lives over the past months and had considered making some fundamental changes in terms of a place to live and work abroad…

One day, while I was in India, I received a call from a friend. He was inviting me to join this yoga retreat in the Carpathians in March 2022 and take photos of his retreat. Although I was unsure myself if I would be willing, I insisted to my husband or the first time, “I have gone to India all by myself – This time I want you to come with me.” I told him we would have a big fight if he didn’t. So that’s how it happened that on February 24th, 2022, we were sitting together in the train heading for Western Ukraine.

Of course, that morning we also considered leaving the country immediately. But my husband Roman had no Covid vaccination, and we were additionally undecided whether they would let him cross the border.

So we decided to take shelter in the Carpathians, a mistake I think now. If we had fled directly, on that first day of the war, we would not be separated. Probably they would have just let him pass.

So instead, we went to this resort with wooden cabins and yoga places. I told to retreat participance that we need habits, despite the war, that we need to keep practicing and doing yoga, and that it will help our body and psyche to stay healthy. In the beginning we did yoga, ate breakfast, meditated, had lunch together and so on, according to a fixed schedule. We followed the news in shock and felt so happy because we thought we were in a safe, beautiful place in the Carpathians.

But as safe as it seemed, the peaceful Carpathian Mountains also had a downside…

Indeed, the Ukrainians who live in this western region of the country were not at all happy about the fact that many people – especially boys and men – retreated to their part of the country. That’s why they asked our men to enlist in the army and defend the country.

The villagers certainly don’t mean any harm, they just have a very traditional view of things, while our part of Ukraine is much more modern. My husband is a creative mind, not a soldier! And yet he felt pushed and also somehow obliged to be drafted. The doctors certified that he was physically and mentally fit, and within four days he received the written invitation to join the army. I thought he had lost his mind and completely freaked out:

So, in order to get ourselves to safety, we had to act. We teamed up with another family and had two cars to drive to the border in Romania. We knew that the chances were slim that they would let us through with the men, but we wanted to try. So, with seven people, we split up into two cars and drove to the border. It was the first of March 2022, we waited eleven hours at the border crossing, we cried, the children cried, the mother-in-law cried. Everyone was crying because we just couldn’t comprehend what was really happening at that moment. So much fear and disappointment around us. At three in the morning, we women and children left Ukraine, while the men had to turn back.

My husband is in Kiev now, they haven’t drafted him into the army until today. He sits around, does volunteering design work, wants to help and thinks too much. I’ve always managed a lot in our family and maybe it’s also a bit good for our relationship that he’s now forced to take more self-sufficiency for his own life. But in such stuck situations, you also run the risk of falling into depression. I, too, feel sad all the time. Even when something good happens, when I meet nice people, when I laugh – it’s only on the outside. Do you understand that? I just don’t feel it. After a ten year sugar absence, I started eating sweets to get dopamine. You know, I can’t open up anymore.

I just don’t know how to be happy when there is a war going on in my country.

As safe as the Mountains seemed, the peaceful Carpathians also had a downside…