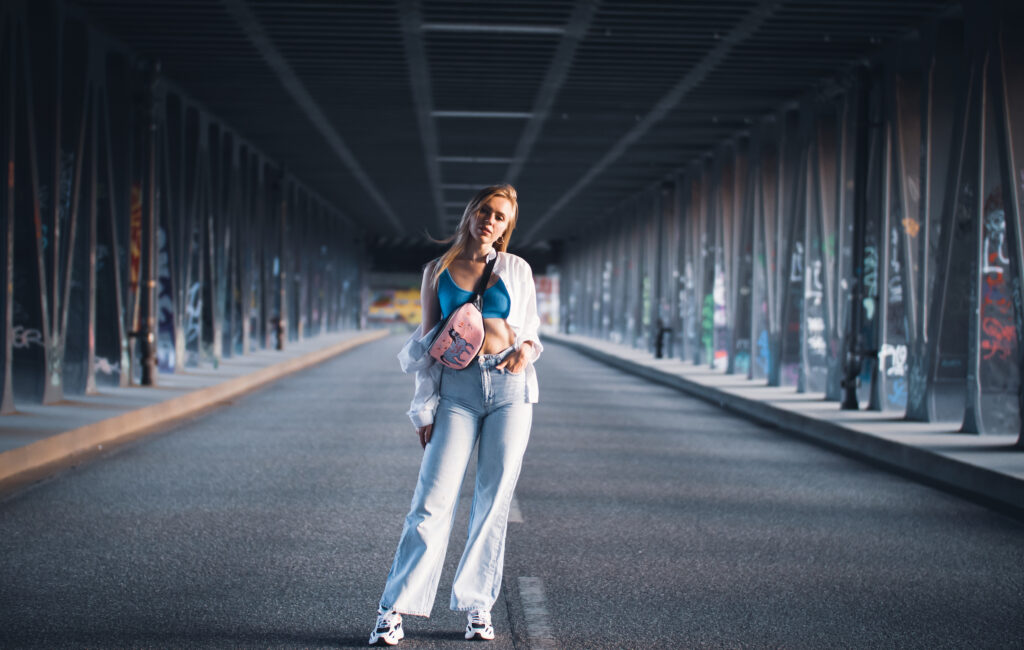 To Nadiia (28) her own story sounds like a blockbuster, “It happened to me! To me – with my once chic and comfortable life.”

What the fuck. I lay on my stomach on the floor of my hallway and looked at the linoleum. Simple surface, brown colored, fake wood. Oh God, that’s a lot of dust particles! I should have cleaned a long time ago… I had a strange look at things, scared and curious at the same time. From this position, I was looking at my brand-new FILA sneakers that I had so wanted and expected to get from the US so badly. Up close they looked pretty massive, bright orange the “Y” print. I haven’t even been able to put them on yet.

I went through the rules in my head I had read to prepare for this situation: In case of an air alarm, the corridor is the safest place, just don’t forget to remove the mirrors from the walls! Still, I had no clue how to behave properly. I was alone, five minutes of silence. I heard nothing from my neighbors, no voices, no running, nothing. Maybe this is just a test? Then I called my boyfriend Alex, who told me to get up and go to the basement. But I could hardly move,

I felt like I was stuck to the floor.

The night before the war, I have had a big fight with Alex and he went to his mother’s house. I cried that night and slept little. When my phone woke me up on the morning of February 24, 2022, I was in a really bad mood: “What do you want from me at this early hour, MOM?!” It didn’t take me a second to gather myself and jump out of my bed. Looking out the window, I saw smoke over the rooftops. Total silence. There was no one outside, no one. No ordinary street sweepers, not even birds in the sky. It was silent. Just like that.

I was overcome by a fear that I had never felt before.

Fortunately, Alex came back immediately, our argument was forgotten – in such a moment, nothing counts. Together we tried to proceed in a structured way and made our way to the pharmacy, the ATM, the supermarket… Outside, meanwhile, there were all these long queues. We were witnessing an apocalypse in the streets, no one was following rules anymore. People were disillusioned, running red lights. Everything was chaotic. I looked at faces that were completely confused and gave the impression, “Okay, everything will be over soon!” Others couldn’t believe the war was serious. I myself had this strong panic; I couldn’t make sense of it all.

I couldn’t sleep at all for a week. I was afraid of falling asleep and not waking up again. I couldn’t eat or drink. I was constantly shaking uncontrollably. I honestly don’t remember what we did all day long, I just remember the feeling of fear. After seven days, I was overcome by the urge for safety. I instinctively just wanted to get away and asked my mother for advice, since mothers always know what to do – at least that’s been the case all my life. But for the first time, Mom answered, “I don’t know, Nadiia. It’s your life.” She was afraid to give the wrong advice, and I suddenly realized that I am an adult myself. When I made moves to take my 16-year-old half-brother with me, she refused. I think that with a child in Ukraine and a child in exile, there is a greater chance that at least one of us will survive.

I was very afraid to stay.

I was very afraid to escape.

Now I am full of guilt because I left.

My parents separated when I was still one year old. When my mother remarried, my stepfather also brought a daughter into the family, my step-sister Tatyana (32). We lived together and shared a room for ten years. Then, when she married a Russian and emigrated to Russia, our relationship hit a snag. Tatyana did invite me to visit her in St. Petersburg or Moscow, but I refused. For me, the war between our countries started eight years ago, you see. Since then, we have not seen each other, and I have never seen my little nephew in real life. Unfortunately, Tatyana believes the Russian propaganda…

My stepsister believes the Russian propaganda – I blocked her in my contacts on the 3rd day of the war.

My boyfriend decided to drive me to the Moldovan border, although it was difficult to get gas. We quite spontaneously took another girl with us and set off. I had only my backpack with me, with laptop, camera and a lot of bandages and first aid material. I thought I might have to amputate someone’s arm if I found myself on a battlefield….

It was day nine in the war, and no one was used to street or curfews. But the curfew had already begun when we stopped on the road to ask a Ukrainian blogpost for a place to stay – somewhat naive in retrospect. He was visibly part of our military, but he was young and looked nervous. He drew his gun and pointed the barrel at Alex’s head. I was frozen, watching the situation. Outside there was total darkness, because of the war all the lights had to be off at night, and all I saw was a silver glint from the gun. The soldier was taking the safety off, he was allowed to shoot if he came across people outside the curfew. I was so afraid that he would kill my boyfriend right in front of me, but Alex tried to explain,

“Okay, bro’, it’s all right, we are from Dnipro…. we are just looking for a shelter!”

Then the soldier calmed down and directed us to a school gym that serves as a shelter for refugees. Still on the Ukrainian side, but close to the border, Alex and I spent our last night together on the floor of the hall. I couldn’t sleep, I was shivering all the time from stress and cold. We had built a nest as a mattress out of dirty, random clothes. We lay down in jackets and placed our heads on my backpack – the most priceless thing I had. We talked all night about nuclear war and our situation. When would we meet again? What if we lost our connection? We talked about a possible meeting place in the mountains. With so many sleeping refugees around us, we had to be very quiet. Then Alex whispered in my ear, “Will you marry me?” I said, “Yes. Provided you stay alive. And so do I.”

When you watch an apocalypse like “Walking Dead”, there’s always one guy who totally freaks out. That was me.

Previous: The safest place for the machine gun was under our marital bed. 
Next: The sound of a siren is like a knife in your heart. 
Wir verwenden Cookies und ähnliche Technologien (im Folgenden Cookies genannt) zur statistischen Nutzungsanalyse, zur Optimierung dieser Seite und zur Anpassung der Inhalte an Ihre Nutzungsgewohnheiten. Mit einem Klick auf „Alle zulassen“ akzeptieren Sie die Verarbeitung und Weitergabe Ihrer Daten. Weitere Informationen finden Sie in unserer Datenschutzerklärung. / We use cookies and similar technologies (hereinafter referred to as cookies) for statistical usage analysis, to optimize this site and to adapt the content to your usage habits. By clicking on "Alle zulassen" ("Allow all") you accept the processing and sharing of your data. For more information, please see our privacy policy (Datenschutzerklärung).
Einstellungen/ SettingsAlle zulassen/ Allow all
Manage consent